Nice University Hospital is one of the 15 partners of the DiscovAIR project (“Discovering the cellular landscape of the airways and the lung”) which has just been accepted within the framework of the H2020 calls for projects. In collaboration with the both CNRS team of the IPMC of Sophia Antipolis (Pr Pascal Barbry) and FHU ONCOAGE members at Nice Hospital (Dr Sylvie Leroy  and Pr Charles Hugo Marquette, Pneumology Department; Pr Paul Hofman, LPCE) we are the only french representatives of this European consortium (see list below).

The Lung Cell Atlas: a novel approach to face the huge burden of lung disease

Lung disease is a leading cause of death worldwide1, with incidence increasing at an alarming rate while curative interventions are lacking. Research into lung disease lags behind compared to cancer and cardiovascular disease, the other 2 major causes of death2. One reason for this may be the high complexity of the lung, with at least 40 different cell types organised in a complex, three-dimensional structure. Hence, there is an urgent need to grasp this complexity and propel basic, translational and clinical research in lung disease into a fast-track for the development of precision diagnostics and therapeutics. To achieve this, a detailed understanding is required of the cells that make up the lung, their fixed and variable features, their interactions and their organization into macroscopic tissue architecture in health and disease. DiscovAIR will establish the first draft of the Human Lung Cell Atlas, focusing on healthy lung, but including small disease cohorts, enabling accelerated translational and clinical research into lung disease. The discovAIR results will facilitate progress in regenerative and precision medicine and identify novel candidates for precision diagnostics and curative interventions in lung disease for the diagnostic and pharmacological industry, thereby contributing to healthy ageing and active living in Europe.

DiscovAIR: a foundation for integrated mapping of molecular state and spatial location of single cells

Recent progress in multimodal molecular profiling of single cells has allowed discovAIR partners to draft the first cellular census of healthy human lung3, and to describe the alterations in molecular states and relative frequencies of cells in the airway wall in asthma. In this work, we identified novel, disease-relevant cell states, such as mucous- producing ciliated cells, and confirmed novel cell types, such as the ionocyte – a newly discovered cell type highly expressing CFTR, the cystic fibrosis gene4. We also chart a radically changed intercellular communication network in disease, revealing a wealth of novel interactions specific to the asthmatic airway wall, that need to be tested for diagnostic and therapeutic applications. We now need to chart the cellular makeup of the lung at higher resolution, sampling more locations along the bronchial tree and in the parenchyma. In particular, we need to map lung cells onto the tissue architecture, chart the local cellular neighbourhoods and their alterations in a wider range of diseases, and identify their molecular fingerprints. This will guide the identification of the processes driving disease inception, progression and exacerbation as well as the development of novel diagnostic and therapeutic approaches.

DiscovAIR will move beyond the current state of the art by combining multimodal profiling of lung tissue cells with a detailed spatial mapping of the identified cell states, 3D reconstruction of lung tissue architecture from transcriptionally defined cell states, in-depth molecular phenotyping of local cellular neighbourhoods and development of novel computational approaches to integrate the multimodal data of the spatial and the cellular branches of discovAIR.

First draft of the Lung Cell Atlas: delivering a blueprint for the Human Cell Atlas

The lung is a complex and highly structured organ, containing an extensive variety of cell types. Molecular phenotypes of lung cells are determined by their role in maintaining physical and immunological barrier functions or facilitating gas exchange, as well as by their location within the tissue architecture. Importantly, healthy lung tissue is available to a large number of research groups through bronchoscopy programs involving healthy volunteers and patients with lung disease, and from lung transplantation and resection programs. This combination of a highly ordered tissue architecture – facilitating the implementation of a common coordinate framework – and good community-wide availability of tissue makes lung especially well-suited as a lead organ for the HCA to develop the infrastructure, workflows and platforms needed for a community-driven mapping effort as laid down in the vision of the Human Cell Atlas consortium5. Consequently, atlases of both the airways and parenchymal lung tissue have been selected by the HCA consortium as a priority effort, with the potential for the Lung Cell Atlas to grow into one of the HCA Flagship projects6. The infrastructure, workflows and platforms developed by discovAIR – rooted within the HCA Lung working group – will serve as blueprints within the HCA community. Best practices and lessons learned from the Human Lung Cell Atlas delivered by the discovAIR project will empower the HCA to achieve its ambition of charting every cell in the healthy human body. 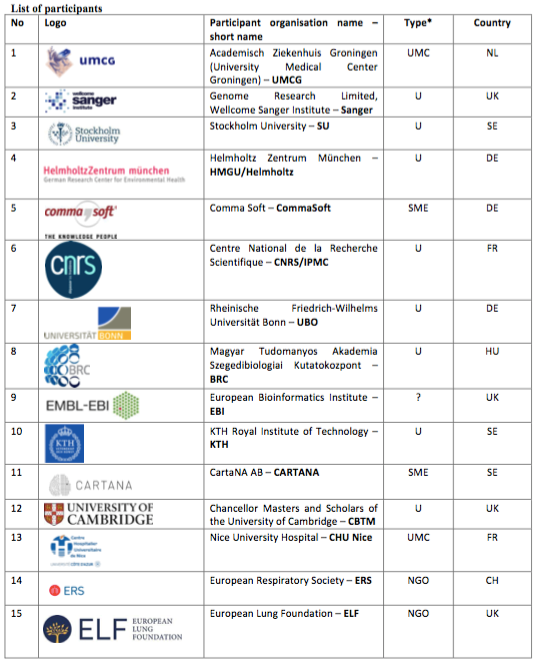